Crown Imperial is a family run business with over 75 years’ experience in the manufacture of high quality British furniture. The company prides itself on offering a stunning collection of contemporary and classic fitted styles, with flexible options to suit you and your home. Renowned for its cutting edge manufacturing technology, Crown Imperial continues to demonstrate its true dedication to innovation and design to deliver a wonderful palette of high quality furniture over seven decades.

Crown Products was founded by Len Head in 1946, following his retirement from the Royal Air Force where he had been flying VIP transport planes across the North Atlantic. Following his success in obtaining a license to purchase timber as a raw material, he began by manufacturing small wooden toys for children. This developed into a range of nursery furniture which was sold from a small shop in Fulham High Street, London.

The 1960’s saw Crown evolve as one of the country’s largest specialist manufacturers of furniture with the British Government as the main customer. Crown also manufactured the wooden frames for thousands of Lyons and Wall’s ice cream stands.

Michael Head was appointed Managing Director after his father suffered a heart attack and following a period of rest Len became Chairman.

The company continued to expand, with a host of new automated machinery and factory buildings. At one point they employed a full-time bricklayer who spent almost 10 years laying bricks and carrying out other building tasks!

In 1980 a political decision enforced a suspension on purchasing of furniture by all government departments. Crown took the decision to quickly diversify and focus on the production of high quality kitchen furniture.

1987 saw the opening of a new 100,000 ft². production facility, designed as the cornerstone for expansion for many years to come.

Following the family traditions, 1990 saw Michael’s two sons Barry and Martin join the business. Both graduates from the University of Birmingham, they marked a new era of development.

1995 saw the introduction of the Imperial range of kitchen furniture.

2006 – Crown celebrated another achievement – 60 years of manufacturing and offering over 6000 different products.

Continued key investment throughout the decade with the arrival of new machinery and stunning furniture styles.

2016 – A momentous occasion, marking a remarkable milestone, with the celebration of Crown’s 70th anniversary as a leading British furniture manufacturer. The Crown Imperial story also began a new chapter, with Barry Head third generation of the family, taking the helm as Managing Director and Michael Head became Chairman.

2021 is a landmark in the history of Crown Imperial, as we celebrate our 75th anniversary of British manufacturing excellence. As a third generation family business over seven decades, the Crown team continue to deliver the latest furniture innovations, dedicated to creating the highest quality furniture to meet the needs of modern lifestyles.

FURNITURE FITTED AROUND YOU

Our Crown Imperial specialists work with you to get the design, colour, specification and price of your furniture just right, so when it's finished, it fits perfectly around you. Each kitchen is purpose-built for your home by skilled craftspeople, who take the time to create something unique and personal for the hub of the home.

With 75 years furniture heritage, 3D planning and design, state of the art manufacturing facilities and a nationwide network of specialists, we have the perfect kitchen for you. We offer appliances, refrigeration, sinks, taps, work-surfaces, lighting and accessories from all the leading brands. Soft-close doors and drawers come as standard as you would expect, and we also offer luxury drawer upgrades. Custom panels are available to order for bespoke fitting, along with our vast and flexible range of cabinets that include medium and high wall options. 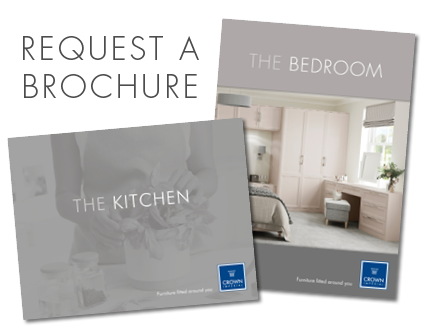